Carl Palmer is a Brisbane Boys’ College graduate who has landed his dream job as a Country Coordinator for Letz Live, combining his passion for travel with his unique experiences as a boarder, gappie and boarding master into his role managing Gap Year Assistants across Australia and Thailand.

Growing up in Inverell, a small country town in northern New South Wales, Carl moved to Queensland to spend his last four years of schooling as a boarder at Brisbane Boys’ College, forming lifelong friendships, visiting friends at their home towns and understanding the significance of mateship and comradery.

When he completed high school, Carl made the decision to take a Gap Year with Letz Live, which turned out to be a pivotal moment in his life. His Gap Year led him to Thailand, where he was placed at the British International School in Phuket, working in the junior boys boarding house and primary school, assisting with Math, English and Physical Education classes.

His passion for rugby followed him to Thailand, where he was assisted with the Senior Rugby Boys team, but rugby wasn’t the only extra curriculum activity he put his hand up for.

“I was adamant about completely immersing myself in the experience, so I got involved with as much as possible, helping out with school camps, excursions and lending a helping hand where needed, and as a result the staff made my time there very special,” Carl said.

“While it was incredible to be able to travel to Laos, Cambodia, Indonesia and around Thailand during the school holidays, I think the best part of the gap year as a boarding master, was the people I met, whom I’m still in contact with; the people made my gap year.”

After a life-changing Gap Year abroad, Carl returned to Australia and secured a place at a University to study pharmacy, a career path he had been eager on since he was a teenager, but something felt different.

“I was always interested in pharmacy as a career, having worked in a pharmacy back home when I was a teenager, but while I was on my gap year I developed a love for teaching and it stuck when I returned home and that passion for pharmacy started to fade,” Carl said.

As a result, Carl swapped test tubes for books and completed a Graduate Diploma of Education and travelled to the UK to teach and work in boarding schools, for the most part in and around Cambridge.

“I have always loved tutoring and helping others with their studies and my love for boarding was also a contributing factor for changing paths and heading to the career of teaching.”

It wasn’t long before his visa was set to expire and home began calling his name, and he returned to Australia where he began conversations with Letz Live founder, Nick Hare, after keeping in touch with him since his first bid overseas as a gappie.

“Having been a boarder, taken a Gap Year and worked as a teacher and a boarding master, I thought that my experiences and passion for new experiences and education could bring value to the team and the gappies heading overseas, because I’ve been there and experienced it first-hand.”

Carl’s passion for travel, gappies and teaching now sees him interview, manage and mentor Letz Live Gap Year Assistants in Australia and Thailand as a Country Coordinator for the organisation.

Highlights of his job include working with schools to understand how they operate and interviewing applicants.

“There is such an energy when you hear the excitement in their voices about the prospect of working in Australia or Thailand and being a mentor to young people, it’s something that I can really relate to,” Carl said.

Letz Live founder, Nick Hare, said having a past program participant with an undying passion for working with young people and education is a huge coup for the organisation.

“It’s a real honour to have past program participants join our team; we now have four full-time employees who have personally experienced the thrills, challenges and rewards of living and working abroad on the gap year program with dozens more working on a more causal basis,” Nick said.

“For me, it is very humbling that young people want to come back and work in our organisation and guide young people through their own personal adventure; it really is hugely rewarding not only for us, but also for our partner school network who offers such a wonderful experience.” 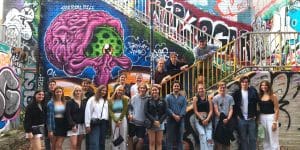 Letz Live UK Gaps have been have been having an amazing experience despite the pandemic. As the UK continues to lift restrictions we were able to organise a group meet up in London with sightseeing tours of this famous city.

Molly is currently on her Gap Year in the UK and despite the pandemic has been having a great time. She’s travelled and met amazing people – read about her story.

Currently in ChristChurch, Hugo has definitely been making the most of his Gap Year in NZ. Read about life as a Gap Assistant and his best travel spots.

Gap Year's are Back!

Applications are now open for placements in 2022!
Apply early to avoid disappointment!